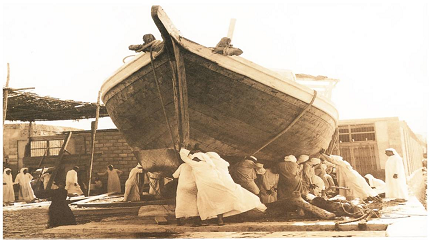 Bukamal’ s history is synonymous with that of the Kingdom of Bahrain, whereby over the years one can trace - growth, development and modernity in all of its aspects.

Evolving from its age-old fishing and pearl-diving industries, Bahrain has come a long way and today boasts of a thriving economy hosting some of the most vibrant sectors such as banking & finance, hospitality, manufacturing and etc.. Bahrain’s transformation also provided a rising curve to many companies like Bukamal which focused on enhancing the country’s vision by supplying quality products and services to the public and private sectors.

The roots of Bukamal family are planted in Bahrain as one of the pioneering merchant families with a rich history stretching back generations. Reflecting on the company’s origins, one can say the seeds of Bukamal’s modern business were planted in the early 20th century, when late Mr. Ebrahim Yousif Bukamal became the leading supplier of comprehensive ship-building materials to dhow-builders. Bahrain being an archipelago naturally made dhow-building one of the country's most lucrative crafts then, a trend which Mr. Bukamal explored fully through an outlet on Muharraq coast.

The company flourished for decades as the country's then budding oil and natural gas industry brought more wealth to the country. But technological advances brought a steady decline to the dhow-building industry as stronger steel vessels originated to dominate the Gulf waters.

In 1975 Mr. Ebrahim Bukamal left for his heavenly abode and the company was forced to rethink its strategy, in 1977 Mr. Hasan Bin Ebrahim Bukamal revamped the company into a hand-tool and hardware retail outlet in Muharraq, he was later joined by his eldest son Mr. Khalid Bukamal. In 1980 his second son, Mr. Jehad Bukamal came onboard and took the company in a new direction, the very first step being, relocating the company to Bahrain's capital Manama and commenced wholesale activities.

In 1990 the family business was turned into a limited liability company, giving Mr. Jehad Bukamal, the desired leeway to realize Bukamal's full potential. Since then Bukamal has firmly moved ahead to be a significant business house providing products & services to B2B, B2G and B2C in several key industries in Bahrain

Mr. Jehad Bukamals’ vision and foresight lead to establishing ‘Bukamal Properties’ in 2010 and ‘Bukamal Holdings’ in 2017 and so this journey continues…..

Prior to 1977 Bukamal was privileged to serve the key industry of shipbuilding which was the foundation stone for the modern economy of Bahrain.

Since 1977 Bukamal has firmly moved ahead to be a significant business house providing products & services to B2B, B2C and B2G in several key industries in Bahrain.

Aided by its professional standards, proficient team & precisely tested policies;
Bukamal will continue to move forward with the innovative developments that are rapidly taking place at home and around the region.